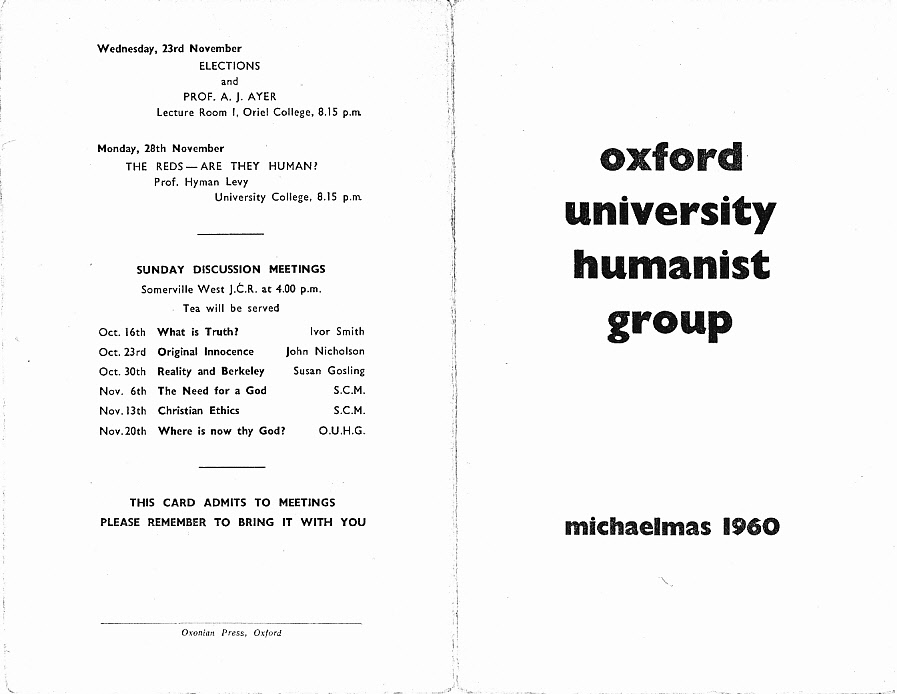 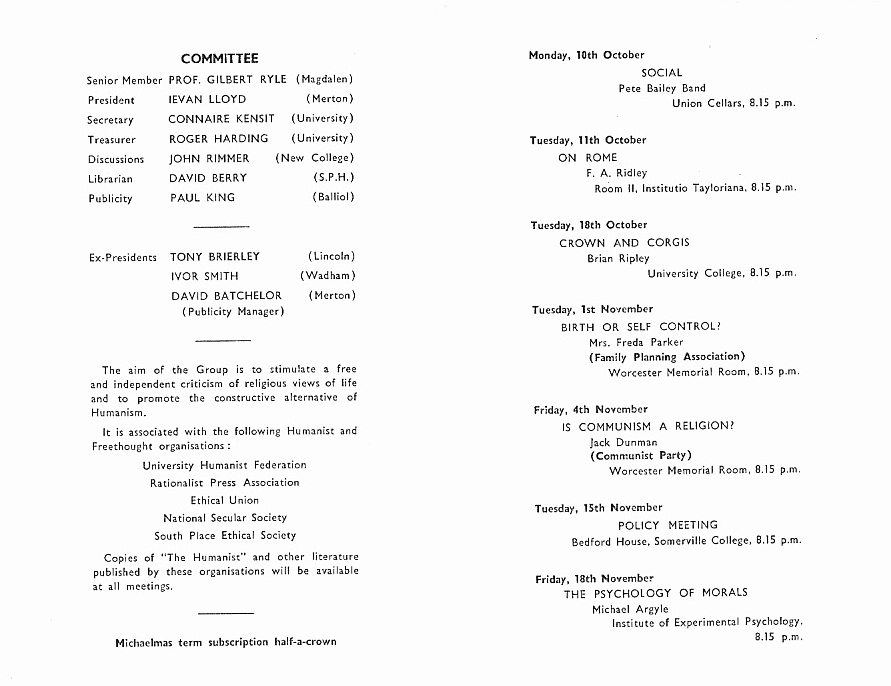 The Group carried out a survey of its members – see here.

The OUHG Committee was highly suspicious of their scheduled speaker for third week,  Dr Brutkopf-Schmelking, given his unlikely name and extraordinary subject and the fact that he was the only speaker who had been arranged by the previous term’s secretary, David Suzman.  Suzman had been defeated in his candidacy for president in the previous term’s elections, contrary to the usual pattern that the secretary, who was responsible for fixing the programme for the following term, would then be elected president for that term.

They therefore made efforts to verify his credentials, consulting reference books and even sending a telegram to Gottingen which, at the last minute, produced a reply saying they had no record of any such person.  They produced no publicity for the meeting but leaked their suspicions to Cherwell, which ran the story prominently on its back page on the day of the meeting (10 May): 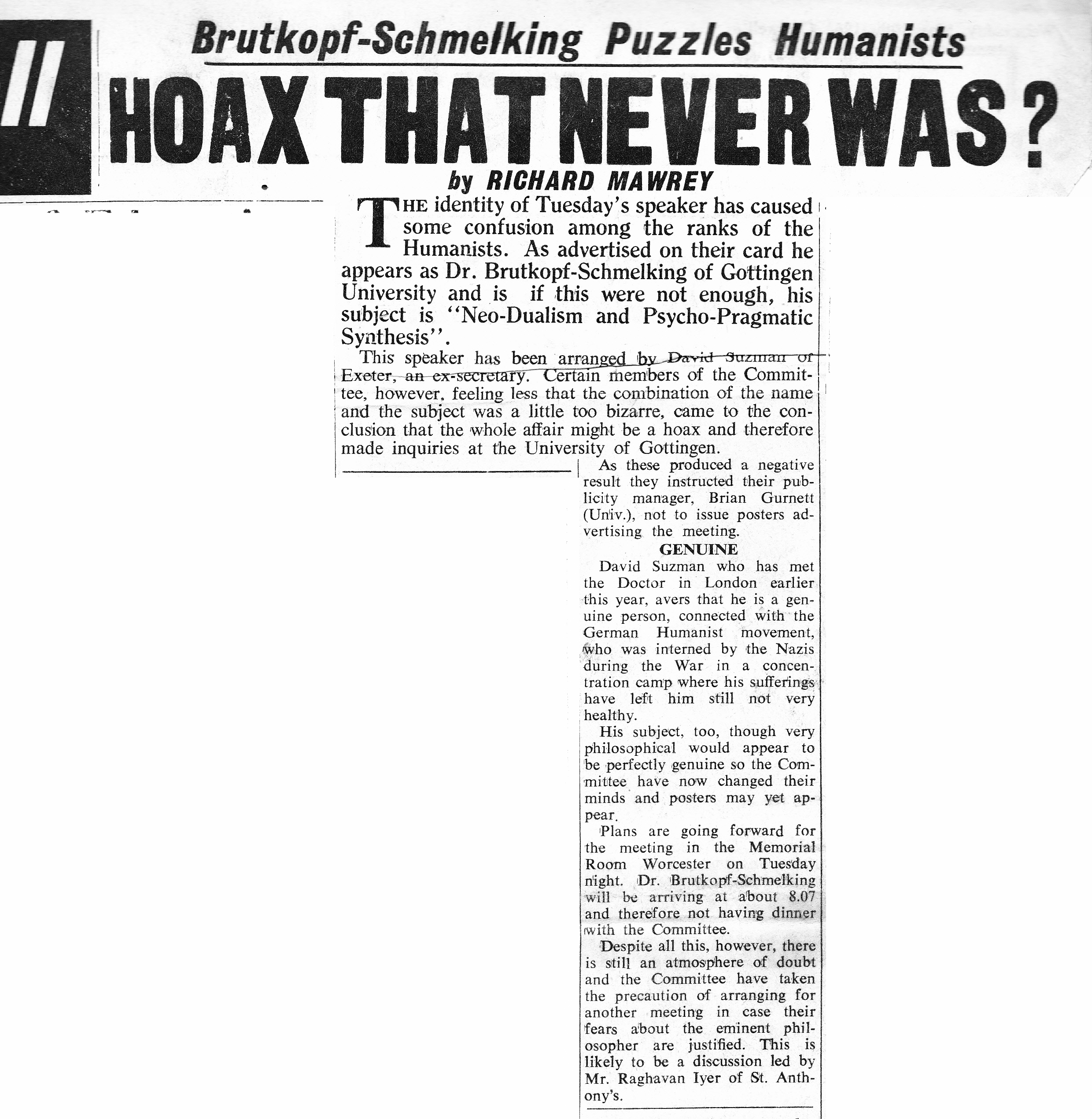 Dr Brutkopf-Schmelking had declined the usual invitation to dinner and was not expected to be on the nominated train from London – the Committee had arranged for Dr Raghavan Iyer from St Anthony’s to stand by as a reserve speaker.  He was not needed – Dr Brutkopf-Schmelking was met at the station by David Suzman (no less) – though he was observed arriving on foot at the station rather than coming off the train. Wearing a trilby hat, a luxuriant beard and strong spectacles, limping and leaning on a knobbly stick, he was met and brought to Worcester Memorial Room where an audience of perhaps two dozen had been warned in advance of our suspicions.  His hosts, still with a margin of uncertainty about his credentials (outright hoaxer or deluded madman?), introduced him and he delivered in a strong German accent a fluent address of pastiche theology and philosophy of staggering virtuosity.

His thesis was that morals could only defended when they had supernatural authority – and so we should have none but should substitute social pressure to conform.  He referred to various early church fathers and the Council of Trent and took questions.  At one point he flung a glass ashtray on the floor where it shattered and asked “Was that a wrong act?”

As the truth became certain, some in the audience held up to his view the Cherwell story.  Glimpsing his notes, Pam Hinett in the chair saw that they were written out in phonetic script!  As the questions became increasingly sceptical and mocking he announced an urgent need to get back to London, and attempted to make good his escape, accompanied by Suzman.  Finding himself pursued, he lost his limp, ran rapidly out of Worcester lodge and leapt into Suzman’s waiting car.  The lead pursuers, the president and the college rep from Keble, managed to get into the car with him, only to be ignominiously ejected half way up St Giles!

It was later established that the learned doctor was Lester O’Shea, a friend of Suzman’s and a prominent member of the Oxford Union Society.  He and our ex-secretary David Suzman provided many of us with the highlight of the term!

There were follow-up reports in Cherwell and in the London Evening Standard.

This was the back page of Cherwell on 13 May: 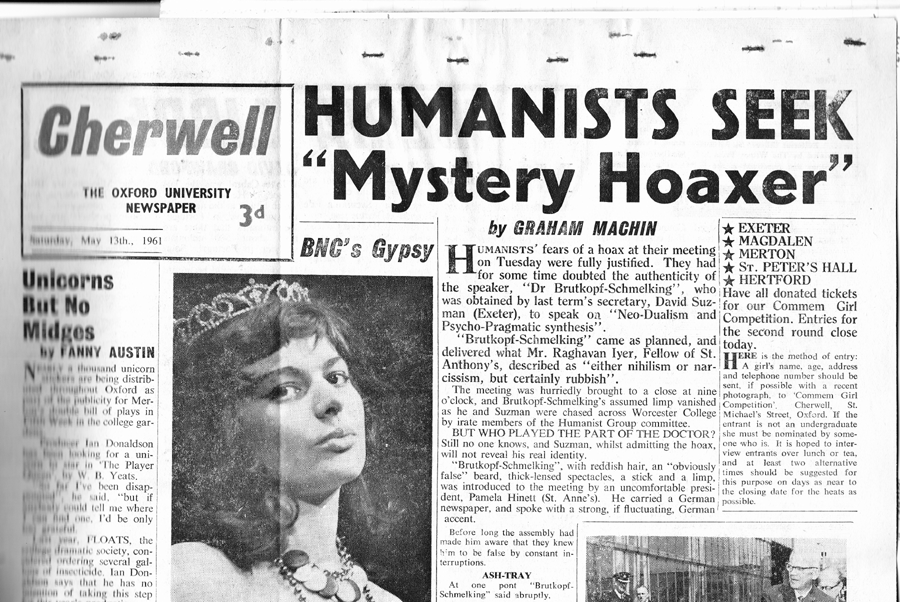 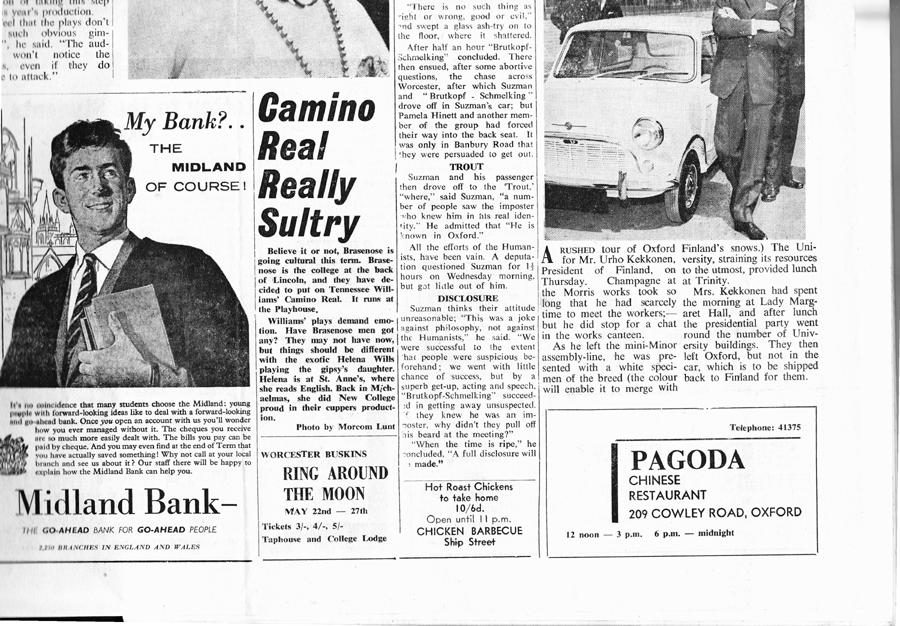 The mystery revealed – Cherwell on 17 May: 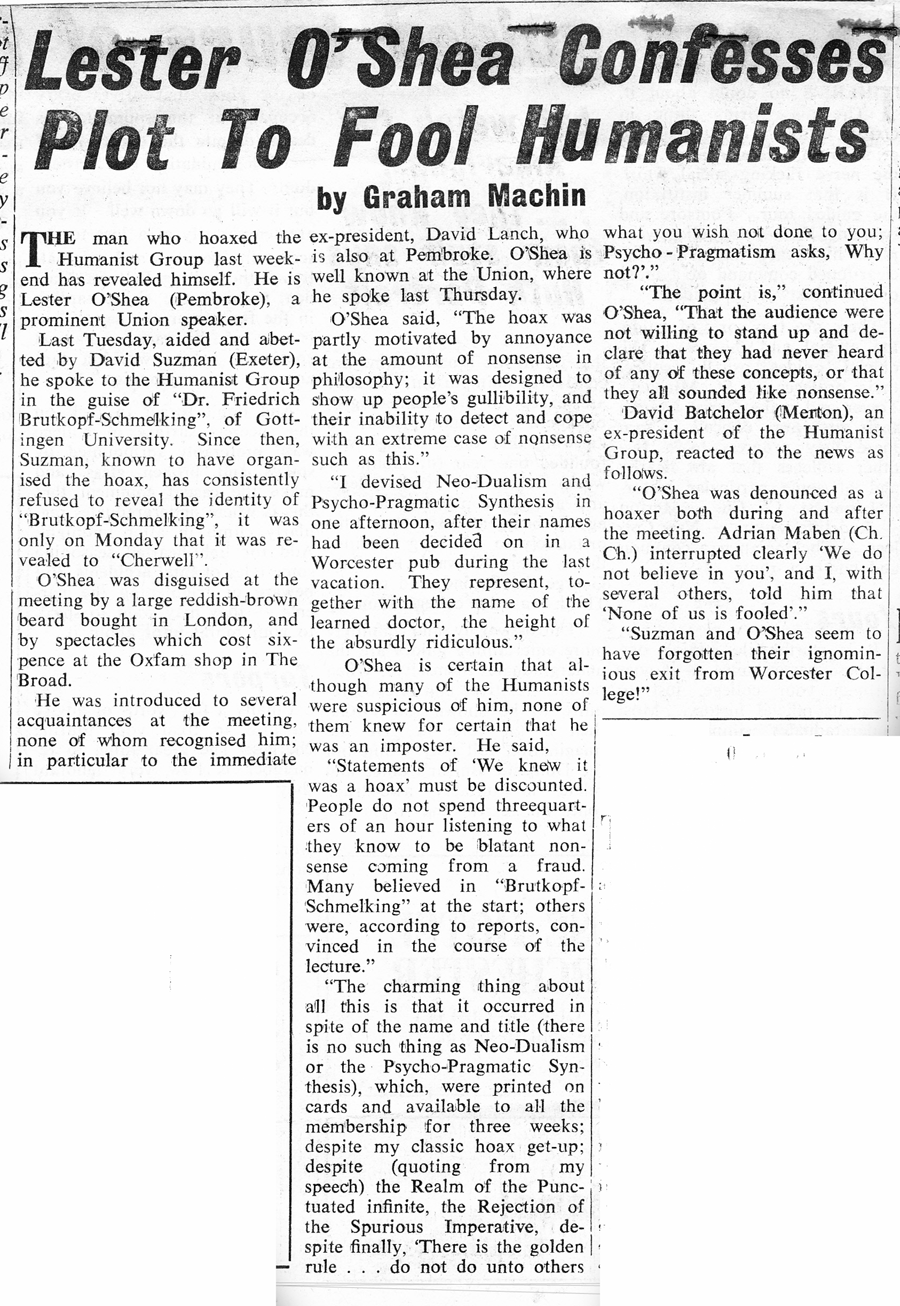 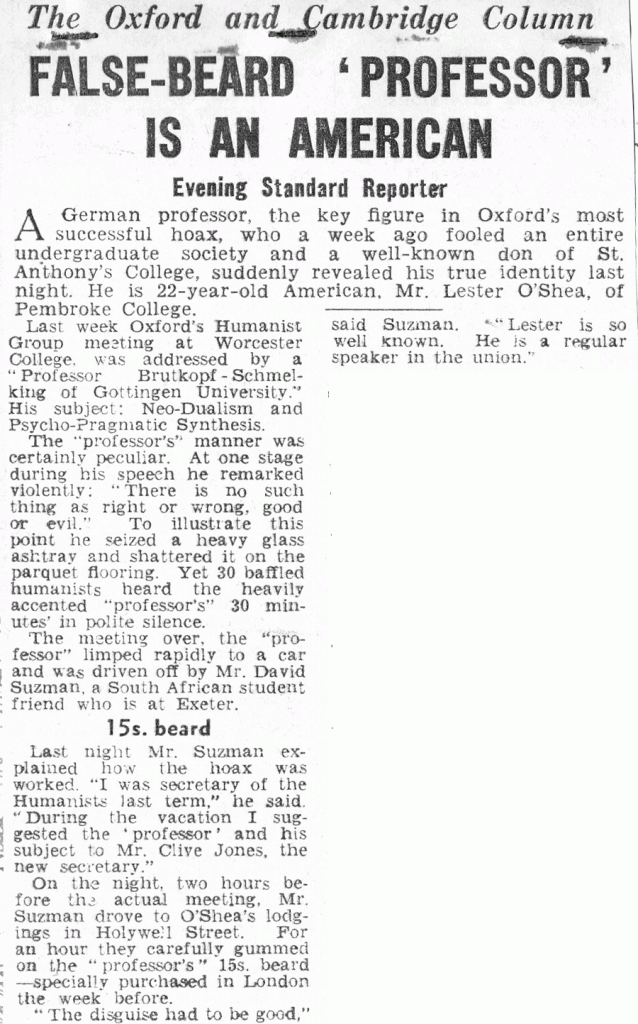 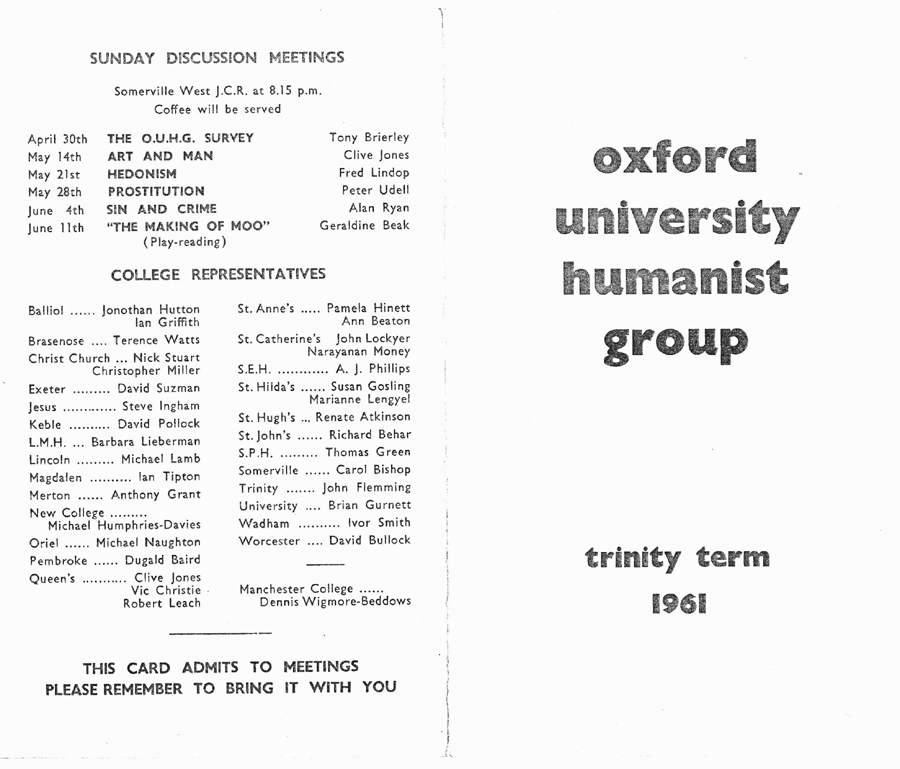 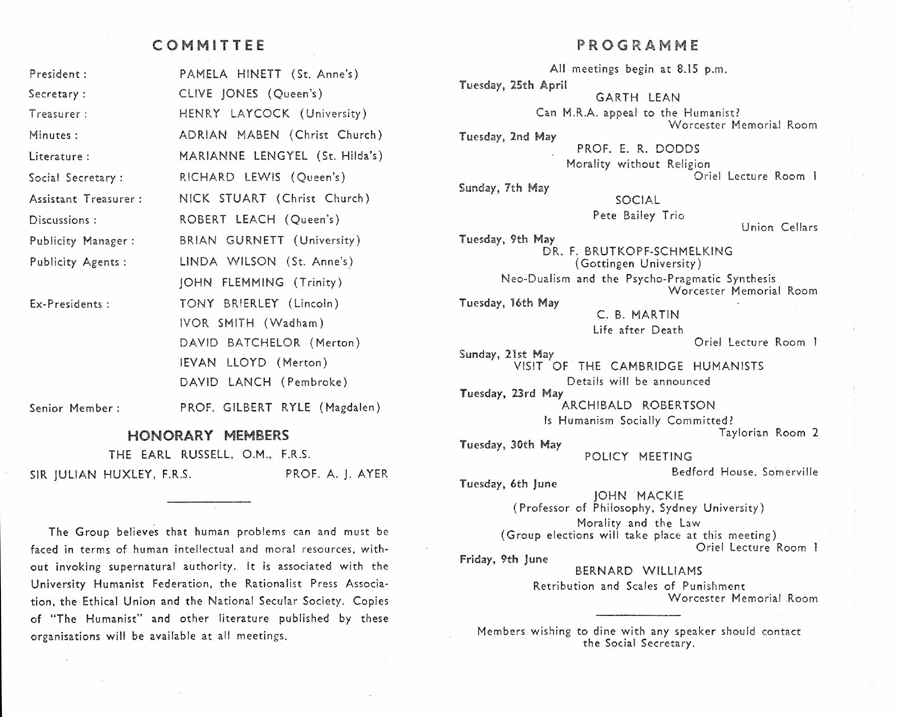 The president was David Lanch, secretary David Suzman and treasurer Connaire Kensit.  A new constitution and standing orders were adopted. 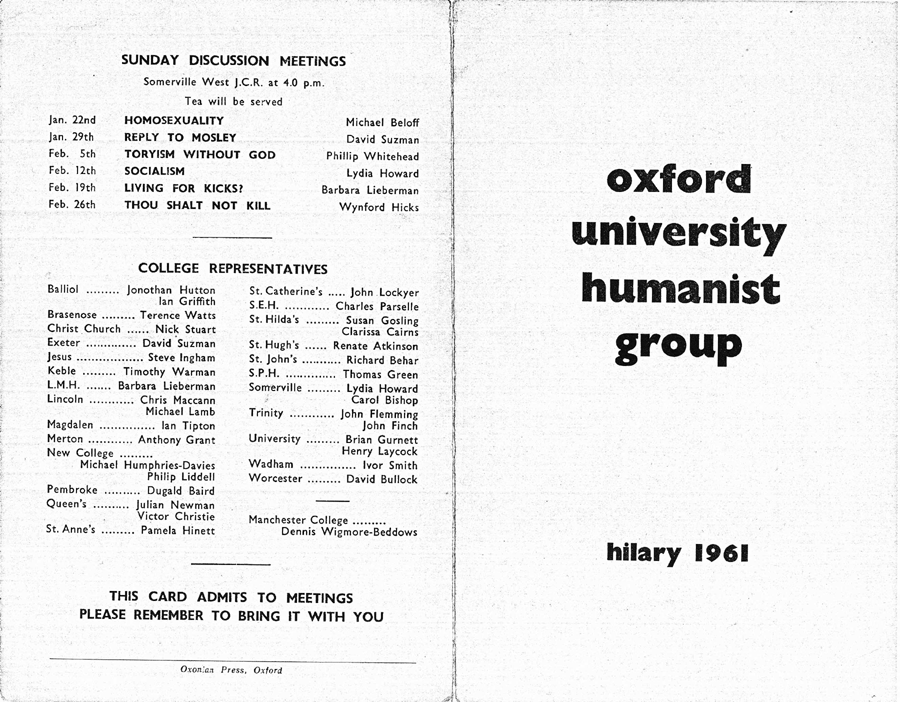 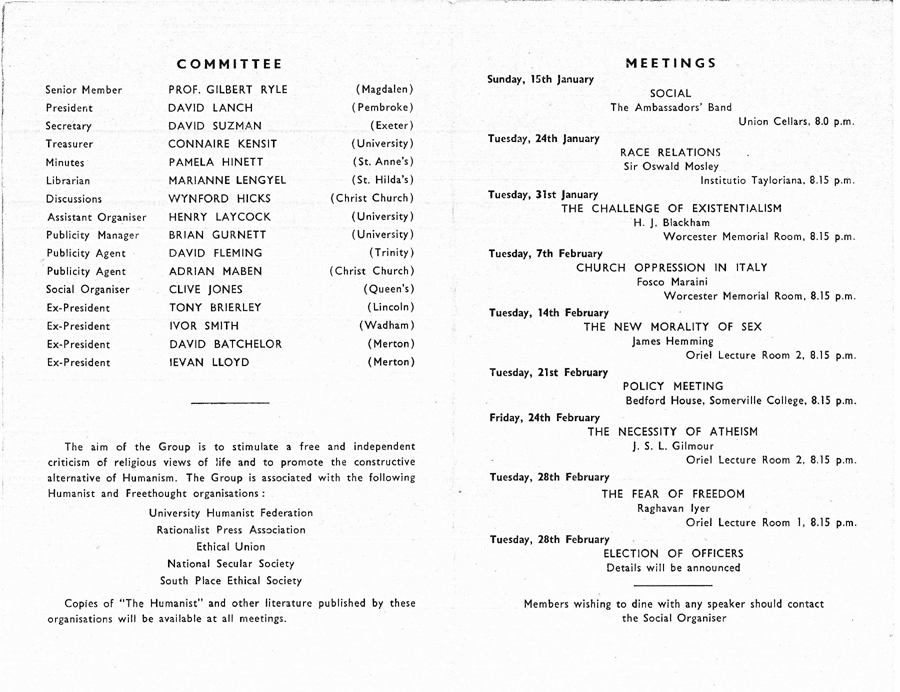 The only poster I can find for the term is this one for the social at the start of the term – its reverse used as scrap when I became Publicity Officer the following term!

David Pollock writes: “This was the first term I encountered OUHG – at a meeting addressed by Sir Oswald Mosley!  Though billed as speaking about race relations, he actually concentrated on his post-fascist European movement.  This was of course a blatant attempt by OUHG to use a notorious speaker to boost membership (and finances) early in the term: everyone who came had to pay the 2s.6d. sub at the door to get in.  And, like me, many as a result found out about Humanism and realised that this summed up their own beliefs – as still happens so often when people hear about Humanism.”

David Pollock referred back to the meeting with J S L Gilmour in a letter in The Humanist in July 1962: